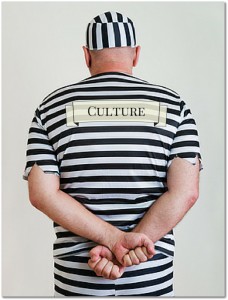 Culture may have been the most looked up word in 2014 but now it’s in danger of being inappropriately overused.  Culture is being blamed for failures in business more and more often.  Here are some recent sample news items:

We cannot allow leaders to start hiding behind the culture – they are the culture. Culture is formed by the values, beliefs and behaviors of the leaders.  So let’s rewrite the stories from above.

Now we’re getting to the root of the issue within these companies.

On the flip side, the same is true where culture is the hero.  Take this Fast Company headline for example: Not a Happy Accident: How Google Deliberately designs Workplace Satisfaction.

What it’s really saying is: Not a Happy Accident: How Larry Page and Sergey Brin design Workplace Satisfaction.  When they co-founded Google they committed to making a truly great place to work.  That is their focus and as a result they have built a unique and very vibrant culture. They are the heroes when it comes to the success at Google.

Culture is formed by the values, beliefs and behaviors of the leaders.  If you want to be the hero of your organization’s culture then you need to be consciously aware of the way you are influencing how work gets done. Phillip Van Hooser, author of Leaders Ought to Know says, “You can’t sit passively on the sidelines, expecting the desirable objectives of leadership growth, influence, and impact to mysteriously manifest themselves in you, because it’s not going to happen.  To be effective as a leader, you must get in the game.”

What can you do, starting today, to get in the game?  Start by getting a handle on your culture – this is effectively a 3600 review of leadership behaviors. Van Hooser also suggests you find out “what words are your followers using to describe you when they talk to colleagues, family, friends, and maybe even total strangers?”  Are they describing a leader they look up to and respect? If you want a company full of innovation, do they describe you as innovative or a facilitator of innovation?

Every day you are writing a story at your workplace, and you have the choice to be the culprit or the hero when it comes to culture.