Could a Brewery Culture be the Recipe for Success in Your Organization?

Recently I had the privilege to go on a trip of a lifetime. I cruised ports along the Baltic Sea, visited WWI sites and memorials where my grandfather fought in France and Belgium, and saw the sites in Paris and London. On day one, while touring the Heineken brewery and museum in Amsterdam I unexpectedly came across a great example of how culture can ensure the sustainability of an organization.

The Heineken Experience tour starts off with the early history of the famous brewery which was founded in 1864. Surprisingly, the very first exhibit was about their values. They described their culture in those early days as one where they shared “a passion for quality, enjoyment of life, respect for people and the planet”. The respect for their own people was demonstrated, among other initiatives, by being one of the first Dutch companies to establish a non-contributory pension fund for employees back in 1909. 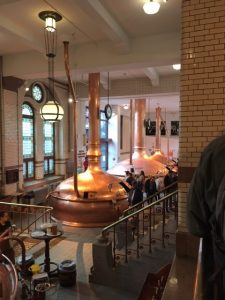 The next sign of their commitment to culture was a life size animated projection of the founder’s great granddaughter. Museum goers gathered around to hear her describe the secret to Heineken’s sustained leadership in the beer market. People are a big part of the recipe. She discussed how each of the values are played out to deliver their strategic plan and brand promise.

Close to 2 million people file through this exhibit every year. How confident would you be to publicly present your organization’s culture? What are you doing internally to recognize and promote the behaviors that drive success? Do you talk about the way things get done often and widely or does the conversation only show up once a year as a minor part of a one-on-one performance review?

These ratings are just a sample of how Heineken shows up globally. Their attention to people isn’t dependent on a few key leaders. It’s pervasive throughout the organization. It takes a lot of commitment to ensure that culture is a priority across and down all functions of the enterprise.

In today’s disruptive world where volatility, uncertainty, complexity and ambiguity are just part of doing business, the lifespan of a company gets shorter and shorter. Over half the companies on the 1957 S&P are no longer there. Yet Heineken has found a way to expand, climb to the top and remain there. It’s been 155 years since those values were first declared and they remain as important to their success today as they did upon their startup.

I don’t believe that great cultures can only be found in relatively young, high tech companies. Despite all the attention that companies like Google, Zappo’s, SAP and Shopify get, we can still learn from some of the oldest companies in the world. Defining the necessary culture, never wavering from a commitment to that culture, and putting people first are the key ingredients to Heineken’s amazing success.

Would you like your company to still be around in 155 years? What’s one thing you can do, starting today, to enhance the culture at your organization?